ICE cold: Developer removes his Ruby library after discovering it was used by US Immigration and Customs Enforcement

A developer has removed his Ruby library after discovering that it was used by US Immigration and Customs Enforcement (ICE).

ICE has been called out by human rights groups and activists for inhumane practices. Most of us saw the headlines and images of children stripped from their parents and kept in cages in detainment centres.

Seth Vargo is an engineer that developed Chef Sugar, a Ruby library which aimed to simplify working with configuration management platform Chef.

Vargo has since taken down Chef Sugar after finding out a company using it recently signed a contract with ICE. Vargo cited ICE's "inhumane treatment, denial of basic human rights, and detaining children in cages," as the reason for removing his library.

"I have a moral and ethical obligation to prevent my source from being used for evil," Vargo wrote on Chef Sugar’s now-former GitHub repo.

Vargo’s decision to remove the library caused downtime for some of Chef’s clients. In a blog post, Chef Software CEO Barry Crist noted the incident hit "production systems for a number of our customers."

Chef Software fixed the issue by going over some of Chef Sugar’s code and re-uploading it to their own GitHub repo.

Many developers praised and stood by Vargo’s decision, even if it hit their own projects. Some were especially vocal about Chef’s contract with ICE: 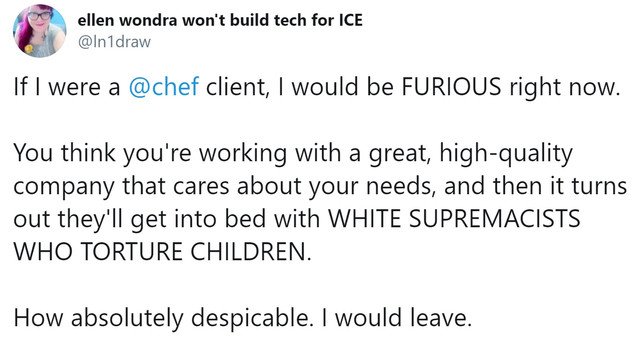 Some internal Chef employees also expressed dissatisfaction with their company’s ICE contract. The situation feels similar to Amazon, whose employees threatened to leave if the firm continued to supply facial recognition technology to ICE and other government agencies.

In a letter addressed to Amazon CEO Jeff Bezos, a group of Amazonians wrote:

"We don’t have to wait to find out how these technologies will be used. We already know that in the midst of historic militarization of police, renewed targeting of Black activists, and the growth of a federal deportation force currently engaged in human rights abuses — this will be another powerful tool for the surveillance state, and ultimately serve to harm the most marginalized.”

Microsoft employees also protested their company’s $20 million contract with ICE. CEO Satya Nadella was forced to reassure employees the contract was not tied to the Trump policy of separating children from their parents at the border.

In an email to employees that was also published on the company's blog, Chef CEO Barry Crist stood by his own decision to continue working with ICE:

“While I understand that many of you and many of our community members would prefer we had no business relationship with DHS-ICE, I have made a principled decision, with the support of the Chef executive team, to work with the institutions of our government, regardless of whether or not we personally agree with their various policies.

I want to be clear that this decision is not about contract value — it is about maintaining a consistent and fair business approach in these volatile times. I do not believe that it is appropriate, practical, or within our mission to examine specific government projects with the purpose of selecting which U.S. agencies we should or should not do business.

My goal is to continue growing Chef as a company that transcends numerous U.S. presidential administrations.”

Crist finishes his letter with a personal note that he does not agree with ICE’s practices of separating families and detaining children. Whether that’s a good enough excuse for Chef’s employees and its clients will have to be seen.