Microsoft has announced hardware due for release next year in a bid to recruit developers for Windows 10X, an OS designed for dual-screen devices.

Both of the new devices, Surface Duo and Surface Neo, have dual-screens and represent what Microsoft believes is the next popular form factor. The former is a futuristic smartphone, while the latter is designed to be a laptop replacement.

The devices have certainly generated some hype. "Surface Neo is the first MS device I'll buy," Guillermo Rauch, CEO of start-up Zeit, wrote in a tweet on Wednesday.

It’s clear why there’s excitement for the upcoming devices; they’re flexible around both work and play.

This flexibility is most evident with the Surface Neo. Want to binge-watch Netflix? Use it as a tablet. Need to multitask? Flip out the second display and drag content between (or continue watching that show you’re now hooked on). Want to write something? A magnetic physical keyboard can be attached to part of one screen and the rest of it will provide a dynamic area called the “Wonder Bar” for things such as emojis or viewing some content like a video or presentation you need to keep accessible. 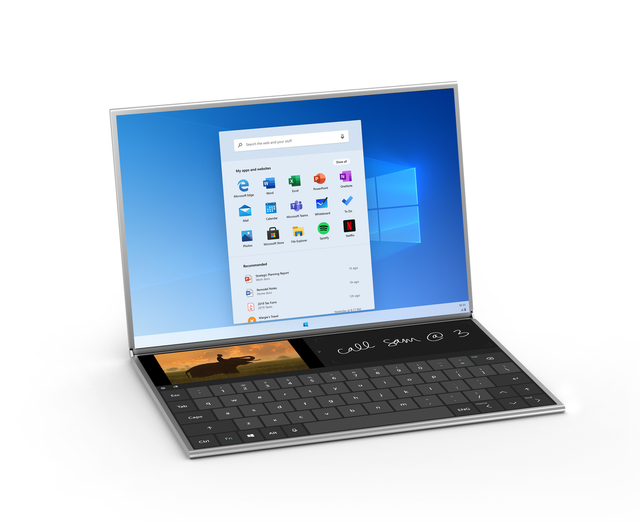 All of these features are cool, but they will take some effort from developers to support. Microsoft hasn’t exactly had the best track record when it comes to attracting developers in recent years.

On-stage, Microsoft Chief Product Officer Panos Panay was very clear the company knows it needs to take developers on its journey and that's why the devices are being announced a year before their release.

“There are a common set of shared technologies in Windows 10 that unlock a whole host of devices across the spectrum from consumers to businesses and industries. Internally, we call these shared technologies ‘one core’ but what matters most to customers is what they enable.

Today, we build desktop PCs, Xbox consoles and HoloLens using this technology. Windows 10X joins the family, built on the latest investments in these shared technologies including newly implemented support for running Win32 applications in a container.

This, together with further componentization and additional investments, gives us the power to deliver more flexible experiences with a wide range of input types and hardware postures all while managing Windows applications and how they use the battery.

It also has the added benefit of allowing us to innovate in the shared technologies and quickly bring these across the devices built on top of them, allowing us to accelerate how innovation reaches the largest number of customers across a vast array of devices.”

Hopefully, Windows 10X doesn't end up the same way as Windows Phone – a fantastic idea but poorly executed. By supporting Android apps on the Surface Duo, Microsoft will reduce the risk of déjà vu where no-one is buying Windows-based mobile devices because their favourite apps aren’t available. Subsequently, this should provide developers with a userbase worth supporting.

Success may largely rest on how easy Microsoft makes it to support dual-displays. That's likely another reason Microsoft has given itself an extra year to listen to developers and hone the platform.