A group of iOS developers who had their parental control apps pulled from the App Store are demanding a screen time API.

The apps were pulled from the App Store over concerns they violate user privacy. Protecting users is fair, but the developers want a way to provide their apps safely.

Seventeen developers have banded together with a technical proposal for implementing such an API.

The developers believe Apple is preventing competition by only allowing its built-in parental control app. Apple has increasingly come under fire over practices deemed anti-competitive – Spotify, for example, recently filed a complaint to European regulators that Cupertino is using the App Store to give its Apple Music service an unfair advantage.

A former Apple executive, Tony Fadell, encouraged the parental control app makers to create the technical proposal. In communications with developers seen by The Times, Fadell said: "I will push it out to the world — just make sure it's done BEFORE WWDC."

In a tweet last month, Fadell spoke out about Apple’s actions with regards to reducing competition in the screen-time field: 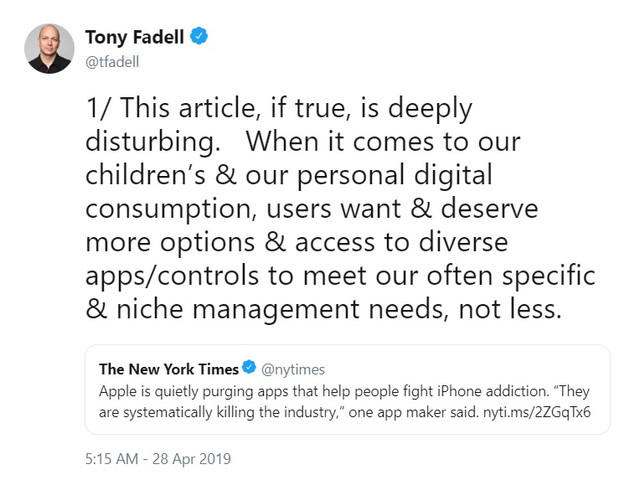 In response to The Times’ article quoted by Fadell, Apple said: “This isn’t a matter of competition. It’s a matter of security.”