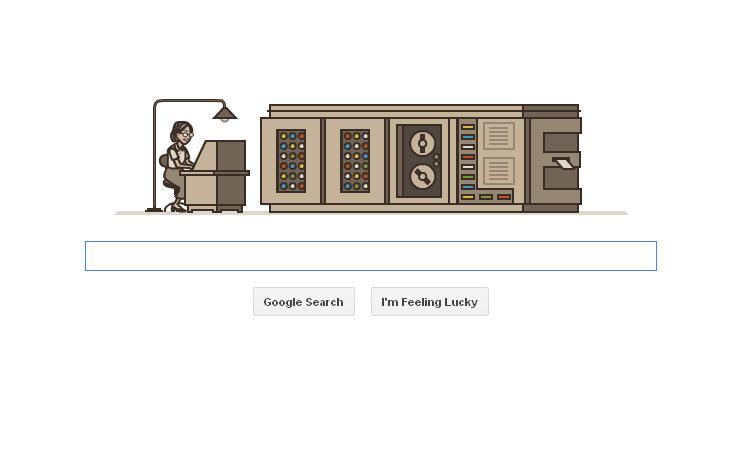 By James Bourne | 9th December 2013 | TechForge Media http://www.cloudcomputing-news.net/
Categories: Development Tools, Languages,
James is editor in chief of TechForge Media, with a passion for how technologies influence business and several Mobile World Congress events under his belt. James has interviewed a variety of leading figures in his career, from former Mafia boss Michael Franzese, to Steve Wozniak, and Jean Michel Jarre. James can be found tweeting at @James_T_Bourne.

December 9 2013 marks the 107th birthday of Grace Hopper, one of the pioneers of computer science and creator of the COBOL programming language.

The occasion has been fittingly marked with today’s Google Doodle, which depicts Hopper sat at her machine calculating her birthday through a simple equation.

Given her great influence on what would become the Common Business-Oriented Language, it’s an ideal opportunity to examine the state of COBOL today.

Derek Britton is product marketing director at Micro Focus, who acts as a custodian for the language, helping evolve and shape it in a manner not dissimilar to the W3C’s steering of HTML5.

His opinion, not surprisingly, is that COBOL is as strong as ever. Yet that’s not a universally accepted viewpoint.

Jeff Attwood, founder of Stack Overflow, wrote back in 2009 the then 50-year-old language was “vibrantly alive, yet so very, very dead”, whilst two years previously Computer World placed COBOL at the very top of its 10 dead – or dying – computer skills.

Micro Focus published a ‘top 10 reasons to learn COBOL’ blog post back in February quoting Attwood’s link, perhaps wisely choosing not to focus on the ‘very, very dead’ part but instead referencing the language’s ubiquity.

They’re certainly right in that regard – approximately 250 billion lines of COBOL code exist – and of course, the IT landscape has changed beyond all recognition since 2007. But in such a fast moving industry, when serious questions were being asked back in 2007, how would things be in 2013?

Britton says that anyone who thinks COBOL is ‘on its way out’ is ‘horribly ill-informed’. “If there’s nothing to say, [writers] will find a reason to find a negative,” he claims.

But how is the language evolving? Under Micro Focus’ watch, COBOL has re-entered the top 20 most popular languages – and it’s all to do with keeping things simple.

“If you have any grounding in computing and you are able to code in another language, moving yourself over to performing an equivalent task in COBOL is relatively straightforward, to the tune of hours rather than days or weeks in picking up the requisite syntax change,” Britton says.

Britton recalls a case involving a US customer who needed mission critical COBOL fixes but only had at their disposal “a glut of C# programmers”, yet they were able to debug the COBOL almost straight away.

Again, Britton notes the simplicity of the language to keep things going, as well as a conscious move from Micro Focus to alter the IDE to something familiar, whether your primary language is C# or Java.

“The jump from any language to COBOL is not quite seamless, but it’s as seamless as you can possibly make it,” he explains.

Much of Micro Focus’ endeavours relate towards making COBOL top of mind in educating the next wave of developers. Back in April, the software company released research which revealed over half (58%) of academic leaders believed COBOL programming should factor in the computer science curriculum.

Yet the research wasn’t all good news; 14% of respondents said COBOL was “uncool”, 5% said it was “dead”, and astonishingly 3% had never heard of it before.

For Micro Focus, who publishes separate personal and academic versions of its products, it’s not exactly minding the skills gap, more ensuring the language fits the emerging developer’s skill set.

“The emerging application programmers of the future, those that are currently at school or colleges, even if they haven’t been trained in COBOL, the jump into COBOL is a relatively straightforward thing,” Britton explains.

“And there are enough signs in the market in terms of COBOL’s popularity, which everyone thought was on the wane but is now coming back up, and it also means that the programmer, irrespective of training, can move into COBOL as well as any other language skill they have relatively straightforwardly,” he adds.

Following a stellar 40 year career in the US Navy, Grace Hopper died on New Years Day 1992 and was interred with full military honours at the Arlington National Cemetery.

For Britton, her influence and foresight cannot be overlooked.

“The fact you could write a piece of code, come back 10 years later and still understand what it’s doing – it’s the enduring benefit of making that language, and that application, unlikely to be rewritten, whereas for other languages that’s never really been the case in quite the same way,” he explains.

“Secondly, she was the one that took the CODASYL [Conference on Data Systems Languages] edict of saying a language can be used by many computers, then adding the caveat of one that anyone can understand.”

Again, perhaps Hopper’s greatest legacy comes right back to the idea of simplicity and accessibility.

“It’s simply because people can come back to it, and still understand what it’s trying to achieve,” Britton adds. “And you can trace all that lineage directly back to Hopper’s design blueprint.”