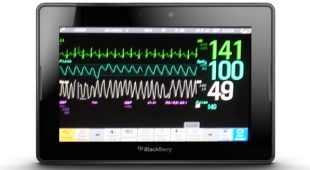 By James Bourne | 14th June 2012 | TechForge Media https://www.cloudcomputing-news.net/
Categories: Developer,
James has a passion for how technologies influence business and has several Mobile World Congress events under his belt. James has interviewed a variety of leading figures in his career, from former Mafia boss Michael Franzese, to Steve Wozniak, and Jean Michel Jarre. James can be found tweeting at @James_T_Bourne.

A developer under the moniker of ‘businesscat2000’ has claimed on the CrackBerry forums that he has made iOS apps compatible with the BlackBerry PlayBook.

Of course people wouldn’t just take his word for it, so he posted a video of him going through several iOS apps on his PlayBook, including Super Monkey Ball, Tiny Tower and Sushi Cat.

CrackBerry, the BlackBerry community support forum, wanted to check if this development wasn’t trickery so initiated two tests. The first was to draw ‘Hi CrackBerry’ on the installed SketchMobile app, and the second was to see if iMore – an iPhone only app – could be up and running.

Having passed both tests comfortably, ‘businesscat2000’ has since claimed responsibility for these videos and explained his achievement: “iOS actually uses a few open APIs already, which PlayBook supports just as well.

“The bulk of the work has been in implementing all of the objective C classes that are required. The ARM code of the applications run as-is – the armv6/v7 support on PB/iDevices are pretty much identical, and the code is designed to run in USR mode,” he continued.

It’s worth noting at this point that despite this, the PlayBook’s hardly going to be a new iPad. There is still, as CrackBerry puts it “more work yet to be done”, especially with more data-centred apps, but this is an interesting shot in the arm for a struggling brand.

The PlayBook has not been doing well for RIM, to say the least: the company announced they were phasing out the 16GB version last week after poor sales.

Most of the comments on the CrackBerry site can be described as somewhat optimistic. One BlackBerry fan said of this development: “My excitement for BB10 and the bounce back of RIM cannot be contained!”, for instance.

Expect Apple’s legal team to come down pretty hard on this one, regardless of legality. Even though it could perhaps be interpreted as good news for RIM, wouldn’t it only reinforce their current PlayBook user community rather than create a new one?

Who is this going to benefit or hinder in the long term; Apple, RIM or ‘businesscat2000’?