App developers may be forced to disclose any foreign involvement

The US government is considering forcing app developers to disclose any foreign involvement after a string of concerns about how users' data is being collected.

One notable example is video sharing app TikTok. The app is developed by Beijing-based ByteDance and concerns have been raised about how much user data is being sent back to China.

Similar concerns have also been raised about viral hit FaceApp which many people have used to make their face appear old, young, or a different gender. FaceApp is...

Mobile attribution and marketing analytics firm AppsFlyer has released a new report highlighting the opportunity for in-app advertising driven by the growth of "hyper casual" gaming.

Hyper casual games are defined as offering instant but highly engaging tap-to-play gameplay. Basically, the kind of games you often see people playing one-handed on packed trains around the world.

According to AppsFlyer, these games now have the highest number of installs on average in 50 percent of the top global...

GitHub has announced native mobile apps for Android and iOS alongside several new features during its annual Universe conference.

The world’s largest repo host first launched an Android app back in 2012 before yanking it from the Play Store in 2015. GitHub’s new app is coming to iOS first this time with a beta already available. An Android version will be launched at a later date.

It’s really quite amazing to consider how long it’s taken one of the most important services in...

Security researchers at Wandera discovered 17 of the infected apps which spanned a wide range of categories including productivity, utilities, and...

Research from Sensor Tower reveals a range of insights about the app development industry and its rapid growth.

Sensor Tower’s research shows app development is a more lucrative business than ever with almost $22 billion spent in the third quarter alone. The huge spending represents an increase of close to 23 percent over last year’s Q3 2019 spend of $17.9 billion. 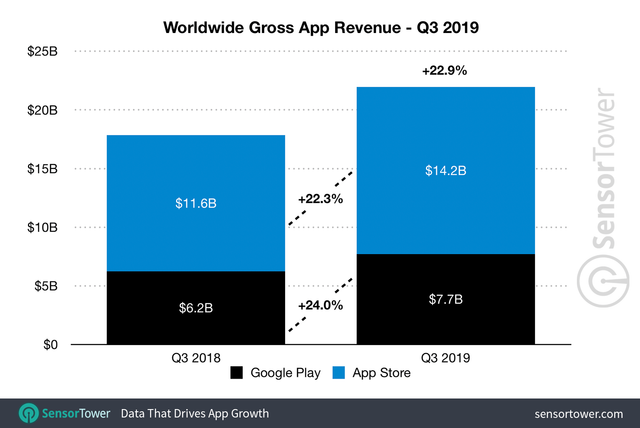 As the chart above shows, the App...

China says Apple needs to “think about the consequences” after reinstating a Hong Kong protest app following a backlash.

Apple has found itself in an unwinnable position amid the Hong Kong protests against the Chinese government.

Earlier this week, Apple received backlash for banning HKMap Live – an app which crowdsources the locations of protests, police, tear gas, ambulances, water cannons, and more – from the App Store.

The developer of HKMap Live criticised Apple for the...

An analysis shows that Apple’s own use of Swift has doubled in iOS 13 as it further distances itself from Objective-C.

First introduced by Apple in 2014, Swift is now the main programming language for development across Cupertino’s platforms. Adoption of Swift by third-party developers is high, but much of Apple’s operating system still uses Objective-C.

Of course, much of Apple’s reason to continue using Objective-C code within its operating systems is that it’s legacy code...

Apple is giving iOS developers whose apps use HTML5 containers and deal with real cash, six months longer to make them fully-native.

The new rules were first announced on June 3rd. Here’s what the guidelines said:

“HTML5 games distributed in apps may not provide access to real money gaming, lotteries, or charitable donations, and may not support digital commerce.

This functionality is only appropriate for code that’s embedded in the binary and can...

The Apple September event may not be as important for developers as the WWDC back in June, but there is still plenty for folks to be getting on with, from updates to OS app development, gaming, and more.

First of all, developers are now invited to submit updated applications for iOS 13, arriving this time next week. A post on...

A group of unhappy developers have penned a scathing letter to Apple CEO Tim Cook over privacy changes made in iOS 13. In their letter, the developers even accuse Apple of anti-competitive behaviour with changes as to how apps can access users’ location data.

Many apps which require location data today ask the user to “Always Allow” when the app is first launched. Such an overarching permission often gives apps more access to a user’s location data than is required for the app’s...